House sold, jobs quited. With a car full of domestic stuff we are riding towards Turkey on our way to a new life. We act as if we are young retired people and are filling our days with walking, cycling and swimming. While enyoing the sun, see and mountains our working life seems a far away memory. Our new freedom is a great good en we postpone our life destiny for another while.

Our adventureous emigration abroad gets a dramatic twist six months later. The complaints I adressed to my menopauze are not at all what I thought they where, I am diagnosed with an agressive form of hormonal breast cancer. A large tumor, spread on four places to my lymph nodes, thus qualified as stage four cancer. Chemotherapie is inevitable. Despite of a very healthy lifestyle in the past years with good food, a lot of exercise and spiritual growht I am now confronted with a dreadful disease. Why is this happening to me? The only thing I can do now is to surrender completely to this new situation and try to get better with every tool possible.

As a patiënt in a foreign hospitalworld it sometimes seems that this whole thing is not about me. The critical, foreign woman, with the unpronouncable name, does not fit in the protocols. With ‘support from above’ I am able to keep positif during the months to full recovery, suprised of the enormous power I posses. This book needs to be written and is a plea for a holistic aproach in the recovery proces from cancer.

The land where the sky is the limit 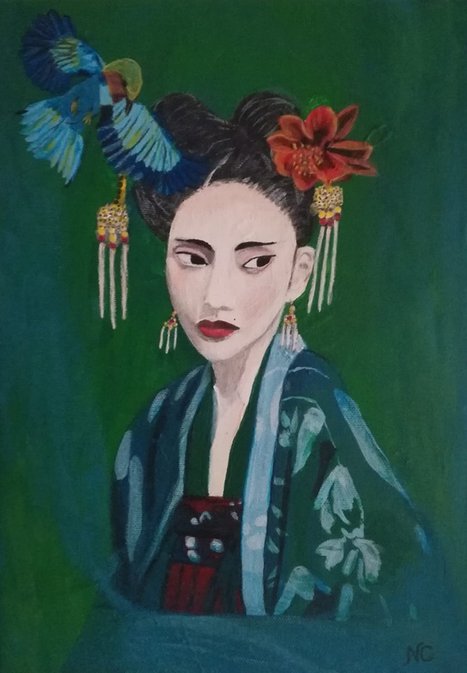 Once up on a time there was a queen who reigned over a country where the sky was the limit. It was a small country where the sun showed her beautiful face almost every day. The people in this country ate very healthy and they rated there every day life with an eight. One cloudy day the palace guard placed bad news on the Facebookpage of the queen. She became sick and the guard invited all citizens to the palace to bring their ideas for healing their queen as soon as possible.

After a long periode of pré selection six serious candidates where left who got an invitation to present their plans to the queen. They where informed that the queen was diagnosed with hormonal breastcancer that had found it’s way through the lymph nodes and settled in the rest of her royal body. The palace doctor, one of the six candidates already knew this. He earlier informed the queen carefully but clearly that he had low hopes. The queen denied to believe this and while she kept smiling spoke the following words:
‘We shall see me dear doctor, you can take everything away from me but not my hope and faith.’

The palace doctor who had a realy boring job, because action was almost never needed, was now confrontated with five unknown rivals. This should have been his moment. After a study of many years he now had the opportunity to make the queen better with the perfect combination of medicin, altough he seriousely doubted if the queen would survive this stage four cancer. Nevertheless he saw his name written in gold at the palace walls and he kept on dreaming of the succes he had been waiting for so long. He would order the medication abroad where he knew a succesfull factory led by a former study mate. The medication was expensif but the queen was rich so money would be no problem.

‘Welcome to my palace, can you introduce yourselves?’, the queen asked. It was a big surprise for the people gathered in the room to see that the queen looked great as if she still gave her life a ten. It was difficult for the crown on the queens head to stay in place because of her wild curls. The queen looked at the people in front of her full of expectation and smiled friendly at them.

The first person who started speaking was a Chinese woman, with a small body but with great knowledge about Chinese healing arts practiced in her homeland for many ages. Se talked full of passion about the art of needles that would help to make the treatment less heavy and to heal quicker. The queen who heared of acupuncture before was scared by the sight of needles in her beautiful royal body but nevertheless kept smiling to the wise Chinese woman.
‘Thank you for your clear explanation madam,’ the queen said. She shortly took the woman by the shoulder when se looked in the compassionated dark eyes.

The second attendant was an angel of unknown beauty. The queen thought she had seen her befor because there was something familiar in the radiant face. The angels words intriged her. The angel spoke about rebirth, healing energie, the path of the soul, mastership and a lot more.
‘Be free of fear, my loving queen,’ the angel said. ‘Everything is going to be good in the end and after that you will understand the deeper meaning of the journey that you will start now. The only thing you have to do is meditate and ask for me when I have returned home. Call me and I will be there.’
‘Teach me everything about meditation, my dear angel. I can feel the importance of keeping peacefully on the difficult road ahead of me,’ the queen said, while she felt her heartbeat slowing down in the company of the angel.

The thirth person in the room was a handsome looking young man with impressive muscles. He introduced himself as her personal trainer.
‘Beautiful queen, trust me. Together we will try everything to make you the way you where before and even better. I will suggest yoga for you and every possible way of exercising in the nature of our beautiful country. I will make the perfect exercise schedule.’
Thank you young man, I will do my best, but many years on the throne made me stiff and a little bit lazy, so don’t be to hard on me.’ The queen kept laughing and shaking the hand of the young man.

The fourth person was an older woman the queen admired for many years. She called here ‘my wise herbal woman’ and opened her books on a daily basis to look for new healthy recipes. The books gave her peace in her busy life. The royal cook was only allowed to use the recipes from one of the books. He cooked as if every day was a party, using only fresh, raw products from the palace gardens.
‘I would advise your royal highness, said the famous food expert, to use food as your medicine. I know that you are already eating healthy for many years but there are a lot of products that can help you to restore your hormon balance and help conquering the cancercells in adition to the chemotherapie and radiation treatment.

The fifth guest was a coach and creatif thereapist.
‘I know that you have an enormous inner strenght, my dear queen,’ said the man in his colourful outfit.
‘Togheter we will find this strenght during the whole journey to recovery and we will create beautiful things. This will help you to stay positive and make you even stronger than you already are. We will paint, make music, write stories and so much more. Togheter we will find out what gives you joy and inner peace which will support you in difficult moments,’ the creatif therapist said making his words even stronger with his expresive hands.

The sixt and last attendant the queen recognized as her own palace doktor. Once in a while she saw him in one of the many corridors of the palace. She seldom visited him. When he brought her the recent bad news, she was that much in a shock that she did not remember much of her visit to him.
‘As I told you before, your royal highness, you have to start as soon as possible with the chemotherapie. After that Radiotherapie and hormon medication will follow. I arrange everything for you so that you don’t have to leave your comfortable home,’ the palace doctor said self-assured.
‘Of course I hope for you and the whole country, my dear queen, that everything will disappear after

these treatments. Finaly we have to see if your royal breast needs some construction work.’

The queen stood straight and looked the six people in front of her one by one deepley in the eyes before she said:
‘Dear people, I thank you for your effort to explain your recovery plans to me. I am impressed. You can contact my secretary now to speak about the commercial details and sign a contract. Together with all of you I will start this journey and I trust that you not only will help me but eachother as well. From this day on you are my new ‘superteam’ and when I am cured you will help al lot of other people in this beautiful country too.

In my ideal world this fairy-tale would be truth. With this book I am sharing my personal, spiritual journey, while stepping in to the role of the queen. On my own strenght and with help of others, I succeeded in finding the way to full recovery from stage four breastcancer with these six important instruments. I wish that these ‘superteams’ will be created in the near future in the whole world to give people with cancer all the possible support they need to recover.